There is the idea of the BMW i3 and then there is driving the i3.  Imagine no water pump, no oil changes, no valves, no oil cooler, and no gas station.  The i3 is made of carbon fiber, it is “baked” and glued together in Leipzig, Germany; this modern plant is also home to 1 Series production.  The i3 is built in a quiet environment, the workers are not required to wear hearing protection, and the electricity to build the vehicle is provided by large on-site windmills.  These windmills can be seen filling the landscape in this part of Germany; these windmills are large and impressive.

Now I know where all my old plastics bottles go, the i3 material seats are made from re-cycled plastic.  The i3 is environmentally friendly to say the least; it is constructed from many other recycled materials.  The dashboard wood comes from fast growing renewable forests; the leather seats are naturally dyed with olive oil and come in only one color, dark brown.  Overall, BMW made a large investment in the entire production process for the new vehicle construction.

In the week before Christmas, the BMW of North America national marketing program brought several i3s to the local BMW dealership as a stop on their national marketing tour. These i3s were European models not yet fully certified for the US market; they had just enough components to be allowed into the US temporarily. The vehicles were all orange with black trim and a black hood, actually all the color options will have a black hood with black trim and of course decorative kidney grills, since a radiator is no longer required.

The electric motor is located in the rear of the vehicle on the driver side and the lithium-ion batteries are located at the bottom of the vehicle for a low center of gravity. Under the front hood is a small trunk to store the charging cables and other small items. More storage is available in the back similar to the BMW X1.

The i3 electric motor produces the equivalent of 170 hp and 184 foot-pounds of torque; this power plant can propel the 2,700-pound i3 to 60 mph in just over 7 seconds. The range of the battery is stated as 80 to 100 miles on average, longer in economy mode.

The test vehicle had the olive oil dyed leather seats which look nice and they were comfortable also. There was great outward visibility through the large windows and the dashboard area is very functional and appealing even with the large center display noted by many as a floating display. It did seem more integrated and visual visually appealing than the display on the current generation 3 Series vehicles.

I started off by backing up and turning around to leave the parking lot. There was a fixed route that the marketing people wanted me to drive and I said that I was just going to drive my normal test route to compare with other vehicles. I turned left onto the road in front of the dealership and when the front wheels were straight, I “floored” the accelerator.

There was an immediate strong linear acceleration without any torque steer or shifting of gears.  The full torque of the electric motor is immediately available; only a slight pleasant whirring sound was noticeable during hard acceleration and an eerie sensation of rushing forward without noise in a hushed cabin.  The steering response is very good, although the vehicle was not pushed to any degree; there were only some minor curves during the brief test drive.

There were no strange sounds emanating from the vehicle, as is the case in some hybrids such as the Toyota Prius.  In the past, we noticed some annoying high-pitched humming sounds in a Prius V that we rented for several days.  Only a slight wind rush was discernible in the i3; no other annoying sounds.

“One pedal” driving is possible under most normal driving circumstances due to the regenerative braking. Under normal driving conditions, releasing the accelerator quickly slowed the vehicle due to regenerative braking which captures energy during braking to help re-charge the batteries. If the accelerator is slightly depressed, the i3 will roll without braking action, typical of a standard vehicle.

My first driving impression was very good, this is a different car in many dimensions, it is much nicer to drive than the Nissan Leaf I drove a few months earlier, the leaf is a front wheel drive vehicle with only 107 hp for the electric motor. There is a display screen for the i3 right in front of the driver that displays such things as the speed of the vehicle.  It is a digital readout and I am not a fan of digital speed display, I would prefer an electronic analog display.

I only drove on the local streets; the battery low alarm sounded when I was going to go on the highway. The i3 is promoted by BMW as a “city car” although it can attain 93 mph, only electronically limited to that speed to conserve battery power.  I was not able to determine the driving characteristics on the highway or wind noise at higher speeds.

It was a nice warm day and the air-conditioning seemed to work well, the summer would be a real test. There is no B pillar and the front door has to be opened before the backward opening rear doors could be opened. The back seating room is restricted and the rear windows do not lower.

An interesting option currently available in Europe is a $9,000 carport with solar panels to charge the i3, there are similar plans for the US market using a company called Solar City; this is an exciting option in addition to using standard house current.  It is possible to charge the 22 KWh battery using 120 volts using a standard outlet in 6 to 8 hours or faster with the higher voltage units (240 volts).

Several other options will be offered, such as the optional range extender option that uses a two-cylinder motorcycle engine to extend the range to 200 miles without stopping.  The gasoline engine does not provide any propulsion; the engine is only used to charge the batteries.  There is an alternate mobility program being considered by BMW to provide i3 owners with loaner vehicles for longer trips.  The current price starts in the low $40,000 range for the base vehicle; the i3 will be available in early 2014.

The i3 is worthy of consideration and I plan to take it on an extended test drive to measure the potential battery drain under my driving style. I’ve experienced much lower than rated fuel economy driving hybrids; one has to adjust to a very slow and undemanding driving style to gain the maximum fuel efficiency as rated by the manufacturers.  I am also looking forward to driving the i3 on the highway.

Statement and Presentation by Oliver Zipse, Chairman of the Board of Management of BMW AG, 101st Annual General Meeting of BMW AG in Munich on 12th May 2021 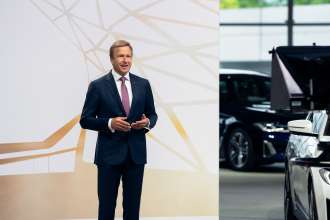 Good Morning to all our shareholders!   A very warm welcome from BMW Welt in Munich.   The Annual General Meeting is the most important event of the year for us. It is where we answer to you – the owners of BMW AG – and show you where your company is headed.   All members of the Board of Management and almost all the Supervisory Board are here today – naturally in compliance with coronavirus restrictions – as Dr Reithofer mentioned – and as a sign of our respect for you.   BMW has a “WE” culture.   "WE”… [...] 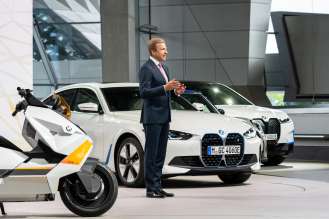 RE:THINK, RE:DUCE, RE:USE, RE:CYCLE – BMW Group makes circular economy central theme of IAA MOBILITY 2021 “Neue Klasse”: “Secondary first” approach to development Next-generation battery cells: Carbon footprint of high-voltage batteries to be reduced by half CO2 goals for 2030 validated by Science-Based Targets Initiative All production and locations to become completely net carbon neutral from 2021 At least 50 percent of global sales from fully-electric models by 2030 Zipse: “We want to play a pioneering role in the circular economy”     Munich. The BMW Group is underpinning its mission for sustainable mobility with ambitious goals for the reduction… [...]

The MINI Convertible: the future is ready for it. 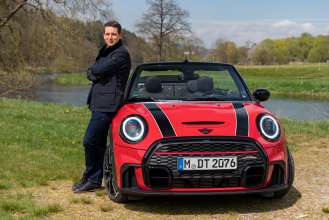 Munich. Electrification, the conquest of new target groups and a consistent customer orientation are at the heart of the realignment with which the British premium brand MINI is setting the course for its future model range. Following the announcement of a new generation of the brand's purely electric small cars, another decision has now been made: The success story of the MINI Convertible will be continued. The development of a successor to the only open-top four-seater in the premium small car segment is a done deal. The new model is scheduled to be unveiled in 2025. "The MINI Convertible has… [...] 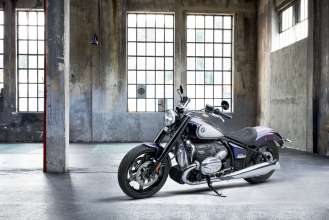 Munich. The existing range of optional equipment and the still growing range of Original BMW Motorrad accessories offer many possibilities for customizing the R 18 and R 18 Classic according to your own preferences. With the introduction of the Option 719 parts, BMW Motorrad is now adding features that enable highest-level bike customisation based on historical roots. After all, the internal code "719" at BMW Motorrad already stood for particularly high-quality and exclusive special equipment, unusual special requests and unique items decades ago. The new Option 719 parts will be available from September 2021. Option 719 Design Package AERO.The Option… [...]